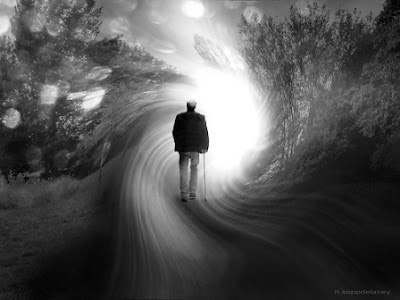 Yesterday I went to sleep knowing I might receive a lesson in form of a dream, and it has been the case. I dreamed a whole adventure, which I don't remember - I only remember the end: I was standing with about three beings surrounding me, I got shot - although painless, it made me wake up - so I shifted from the Dream-Reality into Real-Reality through being shot.

This makes me wonder, all the adventures I was having throughout the dream were not relevant, how I died however in my dream I remember perfectly - the three beings standing around me, one of them shoots at me and I am dead in the Dream-Reality and wake up in the Real-Reality on my bed, breathing in.

It is most important how we die. Sometimes our lives can be a story more or less satisfying or adventurous but when we die, was it all relevant? Did it have any real meaning what we lived? Is it not more important what we leave behind than the experience we had in it?

Let's put for example this world. When I die I might wake up in another reality - or not - and might not remember what I have done here on Earth - So what is really relevant is what I Leave Behind for others to Live.

My dream means: When you leave this world, you are out, so don't bother with treasuring experiences and so on, it is merely an adventure that will most likely be forgotten when you cross over. But what I leave behind, that is Real and will affect those that keep living in this reality.

That is why it is most important to leave a reality here that is Best for All -- In the end we will all die and only what is left behind will be important, not the more or less adventurous story you lived - if My Story on Earth does not cause an impact that changes This Reality - it has no value.

It has to suck to be shot in this Real Reality and wake up in another reality realizing that my whole story had no point, no purpose, no meaning - that my story on Earth did not create an outcome that is best for All - that I didn't leave behind a Solved Earth.

And we will know when we die, how did we die, but our story will it be relevant? If it did not create an outcome that is Best for All I'd say it is completely irrelevant. I tried to remember my dream but I only knew vaguely what it was about - what I DID remember vividly was being shot, my end -- and it made me move in a moment from the Dream into Reality on Earth - it was Radical, nothing was said by the beings standing around me, it was simply my time to go from the Dream into Reality.

The same happens on Earth, when I visited the farm and I was in the car with Bernard Poolman and I was trying to buckle up, put the safety belt on, as we were about to drive - but we were in country roads - and he said 'When it is your time to go it is your time to go' In relation to me putting on the seatbelt -- I reasoned inside myself that if we had an accident and it was my time to go, the seatbelt would be of no use. So I did not put it on - like he didn't. I see I was putting it on in a bit of fear, and not putting it on made me 'face consequence' more clearly, like saying, 'here I am if it is my time to go it is my time to go'. Currently I do put it on, but that moment made me realize that = It is of no use to try to put barriers to death, we will all die when it is our moment to die. And no one knows when it is.

So there arrives the time when it is our time to go, and nothing profound will be said, you will simply shift realities - if there is another reality for you out there - and this Earth Reality you will no longer be able to influence/change -- so let's make the most (read this with common sense) of this opportunity we have to change this Reality -- as this is what is Most Important, that we leave behind a reality that is Best for All.
Posted by Bipolar at 13:10

Connect with me on